Vinchio Vaglio: the Nest of Barbera

The story of the Vinchio and Vaglio winery is a love story where the inhabitants of these two villages transformed a difficult and poor, inarable land with slopes so steep that some local sayings proved true: “S’ot dròca la colassion, it la treuvi pì!” (if you drop your breakfast, you won’t find it again!) or “S’ot dròca ël bertin, ot toca curije drera fin ant la val” (if your hat blows off in the wind, you’ll need to run down to the end of the valley to get it”). The name results from both Vinchio and Vaglio Serra villages where 19 vine growers used to live and founded the cooperative in 1959. The winery is located in Piedmont, Monferrato, core zone of UNESCO World Heritage Patrimony, right at the foot of the Alps. This area with its steep slopes and overhanging vineyards at the edge of the woods has been tended and “tamed” to dramatic effort, where every single drop of the “Ruby of Vinchio” (Barbera wine) equates to thousands of drops (and certainly not an exaggeration!) of farmers’ sweat. However, the vineyards have never failed to reward their hard work. These vine rows, in fact, repay the industrious farmers with grapes of rare and exceptional quality. Nowadays the cooperative represents 192 family vine growers who take daily care of 450 hectares mostly planted in Barbera grapes (60% of our production) and all other indigenous grapes from Piedmont such as Nebbiolo, Dolcetto, Ruché, Albarossa, Grignolino, Arneis, Cortese, Moscato and Brachetto. The territory is characterized by a distinctive terroir of calcareous soils and sandy soils in Vinchio and mostly clay soils in Vaglio Serra what makes the Barbera of Vinchio Vaglio unique for the structure (white soils), elegance (sandy soils) and aromas (clay soils). The sun usually shines all day on these hills, there is seldom hoarfrost or fog and no shadow. Great wines grow on these hills.

Notes and gastronomic excellences protagonists, until 25 August, of the Piedmontese summer in 12 Municipalities

The leitmotif of the whole event will be music, with cover bands and special guests and the great wines of Monferrato. The musicians who will alternate this summer are many and of different musical genres. It starts from the sound of Riki Massini and Bonus Track Band with special guest Clive Bunker, historical drummer of Jethro Tull (1/7) and continues with The Italian Job – Stef Burns, “the Gallo” Golinelli, Juan Van Emmerloot (7 / 7) passing from the fifties rock’n’roll of Florie & The Lazy Cats (13/7); the next day it’s the turn of the historical “Band” of Ligabue composed by Robby Pellati, Mel Previte, “Rigo” Righetti and Fede Poggipollini (14/7). The month of July closes with Enrico Zapparoli tribute by Modà & Negramaro (21/7) and the Emotions Swing & Bossa Band by Max Muller (22/7). August begins with Andrea Braido and The Black Cars (4/8) continuing with the opening band of the Iron Maiden world tour Johnny Gallagher & The Boxtie Band (5/8), the gipsy-jazz-bossa of the Bruskers Guitar Duo Gipsy ( 10/8), the homage to Lucio Dalla proposed by Ricky Portera and Gemelli Astrali (12/8) and the two final evenings with Giorgio Conte in “Sconfinando” Tour in the company of maestro Alessandro Nidi (23/8) and Giorgio Buttazzo and the Acoustic Trio Bermuda (25/8).

Each evening will be accompanied by quality wine, with the Barbera protagonist, which will be possible to taste for each event in the program, along with a basket of typical products ranging from rubatà breadsticks, robiola, cooked salami to tench in carpione to peaches stuffed.

“The noble wines of Monferrato – says the president of the Consortium Barbera d’Asti and Vini del Monferrato, Filippo Mobrici – marry the music of the stages of Monferrato on stage, a festival that involves some of the municipalities of production of the names that we protect and promote. This year we support the review that takes place in the wine regions and in some of its most evocative villages, because we share the basic philosophy: the enhancement of local history and its cultural heritage, landscape and production through its great wines “.

“A review that conquers new spaces – says the Piedmont Region Councilor for Agriculture, Giorgio Ferrero – is a lively and vibrant review, which grows and finds in this a confirmation of his mission. Monferrato on stage is an occasion of great importance. to promote a territory that gives prestige to Piedmont. Barbera and Vermouth are worthy contraltari of music, and remember that the Monferrato is a land rich in history, culture, exceptional landscapes, wine and other food and wine excellences. Remembering it once again is important to make known to those who ignore it a territory that deserves to be frequented “.

“This event – says the president of the Province of Asti, Marco Gabusi – is characterized by its intent to unite, surpassing the logic of the bell towers thanks to a modern communication and a renewed graphics for a brand of an event increasingly linked to our territory”.

“The Ecomuseum is an institution of the Piedmont Region that enhances the memory and what better occasion of the music to do it” declares Elisabetta Serra, director of the Ecomuseum of the Basso Monferrato Asti (BMA) among the partners of the event.

To give voice to the Monferrato and to the whole festival will be the radio speaker Manuel Giancale (ManuJ) of Radio Veronica One that will lead and animate the evenings alternating with the rock and pop notes of the numerous artists on the stage.

BREXIT: COLDIRETTI, CROLLA DEL 12,7% EXPORT MADE IN ITALY IN UK 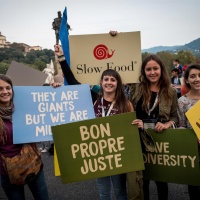