The over-production and over-consumption of meat is a vital problem for the environment and our health. Slow Meat is offering a solution. 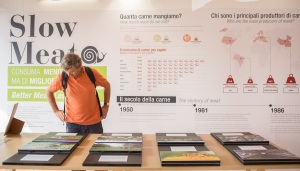 The production and consumption of meat has become a central talking point among the public thanks to Slow Meat’s interactive stand at Terra Madre Salone del Gusto, taking place in Turin (Italy) until 26 September.

The production and consumption of meat has become a central talking point among the public thanks to Slow Meat’s interactive stand at Terra Madre Salone del Gusto, taking place in Turin (Italy) until 26 September.

Over the past seventy years, global meat consumption has increased six-fold, from 45 million tons per year in 1950 to 300 million tons today. This figure is expected to rise to 500 million tons by 2050, an increase of 10-fold since 1950 and double what it is today.

What does it mean to eat meat responsibly and sustainably in today’s world? How can we safeguard our rich heritage of raising domesticated animals, something that is central to rural communities across the world? What are the environmental and health implications of industrially raised meat? The Slow Meat campaign is trying to answer all of these questions and more, examining the real cost of the meat that lands on our table and comparing both production methods – industrial and sustainable – to understand the outcomes of our choices.

Serena Milano, General Secretary of the Slow Food Foundation of Biodiversity says, “It is unsustainable for the West to continue eating meat to the levels that it’s used to. Animals are being raised in inhumane, stressful conditions in increasingly crowded environments. Low quality animal feed, monocultures, deforestation and the use of large quantities of water are all consequences of the industrialization of animal farming. This will have terrible effects on the environment, our health, animal welfare and social justice. But by making better choices, we can change this.”

Slow Meat’s tagline – eat less meat, of better quality – is of crucial importance for both our health and to save the finite natural resources that are being used to produce meat.

For Slow Food, an educational campaign to teach consumers why they should avoid buying cheap meat is important. Low prices are reflective of poor quality. This, in turn, is demonstrative of how poorly farmers are raising their animals, whose welfare is not cared for and whose feed is of poor nutritional quality, as well as the hidden costs that harm the environment. Improving the quality of meat and reducing its consumption would lead to a decrease in diet-related diseases that are currently putting a huge strain on public health systems.

Terra Madre Salone del Gusto has also dedicated a space to the Slow Beans network, demonstrating the many nutritional benefits of beans as an alternative to meat. There are also 40 bean exhibitors at the event and 188 bean varieties at risk of extinction that are being safeguarded by the Slow Food Ark of Taste.

Richard McCarthy, executive director of Slow Food USA presented the Slow Meat Manifesto: “The industrial model of meat production has isolated us from this grand multi-species community, and instead we are isolated in a culture of confinement. Animals are confined in torturous conditions, dollars are confined to the hands of few, and eaters are confined to unsavory options – our future confined to a desolate path. It is time to break free.”

The Slow Food Asia network explained how obesity levels are rising exponentially in the countries where meat is increasingly forming part of the diet. It’s necessary to find alternatives, to reconsider how our ancestors ate with a diet rich in vegetarian protein, which is now being preserved only in indigenous communities.